Reserve the Date: In honor of the 40th anniversary of the incredible events at Entebbe on July 4, 1976, we will be showing “Operation Thunderbolt” next Mozaei Shabbat at 9:45 PM in the shul. Relive together thepride and the joy that Jews worldwide felt in the aftermath of this modern-day miracle. 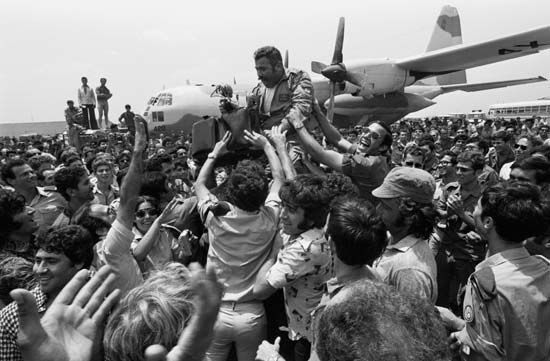 On Saturday evening July 2, 2016 at Congregation Agudath Achim a commemoration of the Israeli Raid on Entebbe to free hostages taken aboard Air France Flight 139 included a showing of a Documentary and Movie about the historic event.

Attendees were treated to a Pizza and Ice Cream dinner in addition to the two films.
The raid on Entebbe was a masterful plan created by the IDF to fly four transport aircraft from Tel Aviv to Entebbe in Uganda, where the hostages were being held. The raid and rescue was not without its casualties. Yonatan Netanyahu, older brother of Prime Minister Benyamin Netanyahu, was the only IDF fatality. Three hostages were also killed. The operation was renamed Operation Yonatan in memory of Yoni Netanyahu.